Blog - Latest News
You are here: Home1 / Blog2 / Time to Re-focus on Keeping Up Screen Appearances 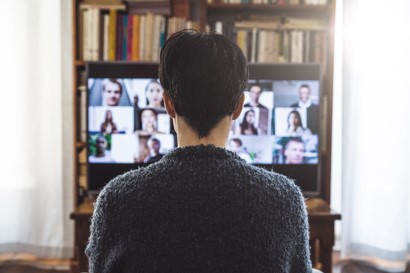 Remember back in the early days of the pandemic when remote working suddenly became ‘a thing’ and how we embraced the change or struggled to adapt (and more likely a bit of both). Two years on, screen meetings are very much the norm, but have we become too used to them, resulting in increasingly sloppy performances in those Zoom and Teams meetings?

I am not the only one noticing the creep of complacency when it comes to appearances on screen. It seems that the more comfortable we become with conducting business via camera, the more our standards are beginning to drop. Casting an eye over attendees gathered in an online meeting room, it sometimes feels like not only has dress-down Friday become an everyday occurrence, but that some participants have taken it to the next level and decided that today should be pyjama day!

Common complaints from senior partners and executives include a general lack of personal grooming (including shaving), the wearing of inappropriate attire (hooded sweatshirts in particular) and sporting a shirt as if it was a holiday accessory rather than acceptable office wear. Most visible offenders tend to be more junior and, as the above list of transgressions indicates, more often than not, male members of the team…

When the pandemic began, there was an inevitable adjustment period as workplace meetings and office collaborations switched on-line. In the early days, a whole generation of workers who had, to that point, showed little interest in projecting themselves on screen clamoured to get up to speed on how to make the most out of video.

From backgrounds, lighting and even chair positions to investing in better audio and video tech, it was a steep learning curve for many. Hardware aside, everyone was also navigating the unchartered waters of Zoom etiquette and attempting to boost the effectiveness of workflow that was now piping through digital networks.

The adaptation was often easier for digital natives who had grown up with tech and a culture of using video as a medium. And, perhaps, this generation gap also has something to do with the appearance deficit we are now seeing. The past two years represent a significant chunk of the working lives of employees now in their twenties. As such there is less of an ingrained memory of the expectations, norms and standards of the traditional/pre-covid workplace.

An excuse it may be, but nevertheless there is never an excuse for a sloppy appearance if you are working in an industry which prides itself on professionalism. Dressing down may be excusable if you’re a maverick genius in the Dominic Cummings mould (extremely unpopular he may have been but there is no denying the man got stuff done), but very few can get away with it and the very few that do are in the job precisely because they have been recruited for their genius.

For employees in blue chip and magic circle industries, the rule of thumb should be to dress as professionals, in the office or on the screen. Without risk of sounding like a National Service recruitment officer, fixing the issue is rather easy and starts with (in certain instances) a razor and a conscious decision to change out of your lounge wear (a phrase I find particularly disagreeable but better, perhaps, than ‘home clothes’ which harks back to a bygone era of days out from boarding school) before turning on the laptop. Through the initial 2020 lockdowns there was a proliferation of ‘looking good’ on Zoom advice and it is worth revisiting because it was given as the workplace straddled old and new normal and therefore pertinent. Aside from wilder claims such as the heralded return of shoulder pads, was more useful advice on how to keep up standards.

You may well be wearing beach shorts and flip flops beneath the desk, but wearing a good quality shirt provides the kind of impression expected. To this I would add another accessory, the tie. Few items of clothing project such a quick and tangible sense of professionalism, as a glance at Stephen Fry’s new book suggests, and also avoids the common faux pas of an open neck which is just a tad too casual.

In my opinion this current state of dress down complacency is probably a blip, one brought about by pandemic fatigue as much as a conscious effort to downgrade. The transgressions are slight enough to be a source of annoyance to seniors without being a real issue to crack down on, and for this reason, perhaps it’s also time for businesses to re-emphasise their dress code expectations to make it clear for this new hybrid era we’re working in.

In the meantime, I think the succinct advice of Tom Ford, designer and one-time creative director at Gucci and Yves Saint Laurent speaks volumes:

“Dressing well is a form of good manners”

Listen to What Your Client is Actually Saying

How To Present Effectively For a Hybrid Event
Scroll to top