Blog - Latest News
You are here: Home1 / Blog2 / How not to be skewered by hubris in a pitch 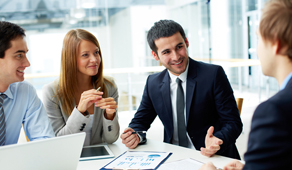 Did you know that, given the chance, a goldfish will eat itself to death because it doesn’t know when to stop? A more commonly known fact is that a goldfish has a 9 second attention span (unless of course you are continuously shovelling fish flakes into the bowl).

If you’ve finished the last paragraph your powers of focus are on par with the UK’s third most popular pet. In fact, according to scientific research, yes scientific research no less, you have now surpassed the average attention span of a human being in the smart phone era which is now 8 seconds (down from 12 when phones were exclusively for calling – this may come as a surprise for younger readers).

In Hollywood, the average time you get to pitch your idea to a movie maker is said to be 60 to 90 seconds. Fortunately in business you get a little longer but, believe me, not that much more.  An audience’s attention span is somewhere between 7 – 10 minutes. If you are not going to make an impression in that length of time, you may as well crack open the fish flakes.

Some people love pitching. Most people don’t. The pitch really is the ‘it all boils down to this’ moment. It is also the point where it can all easily unravel and that person who has been telling everyone they can sell anything to anyone becomes skewered on their own hubris. So here are my top tips for improving your pitch:

I can never emphasize this enough. From having your material in order well before, to taking the time to practise your pitch out loud, in front of a mirror and in front of an audience (preferably of peers, but even the goldfish will at least give a point of focus). Words that look good on the page can sometimes become a wad of verbal chewing gum when spoken out loud. If you are prepared you will be relaxed. If you are relaxed you will be focused. If you are focused you will command attention.

This is an extension of your preparation. Don’t forget the attention thing. There is no room for waffle, lingering on points for too long, going off tangent or trying to tell a market leader what their industry is all about.  To paraphrase Voltaire, ‘if you want to bore your audience, tell them everything.’

There’s nothing more uncomfortable for an audience than sensing the fear of somebody about to pitch. From nervous fidgeting, leg jiggling, finger tapping and lip biting to furrowed brows, urgent note checking and uncomfortable ums and ers.  Smile and seek to engage. See the person or the panel in front of you as a friend not an enemy. It’s their job to have a war face on and they may well have been sitting through the same thing and asking the same questions (thank you Procurement) all day. It’s your job to melt it.

Why is The Apprentice still on prime time television? The formula hasn’t changed, the tasks remain the same and the candidates get no better – yet millions still tune in. It’s a trashy example, but it also provides great examples of how not to pitch collectively. It’s not a competition. It’s not a chance for you to shine individually. If you are pitching in a team, you are part of a team and your project is the sum of all parts. If you don’t know your team very well, get to know them, spend time together and what better way to do this then by rehearsing together, especially how you are going to hand over to one another without looking like you are on QVC.  Never forget this.

The best pitchers are often those who can read the room and adapt themselves to the dynamic. This is particularly true in a business boardroom. Often the person making the most noise on the inquisition panel is not the decision maker. These will often be the ones who are sitting back, observing. Include everyone and use eye contact – relaxed eye contact that is (don’t frighten them).

If you reel off a load of predictable facts and statistics which serve little purpose other than to self-congratulate and are not relevant to the people in the room, they will not engage with you.  But if you tell them a story that relates to what they need to hear and is to the point, you can include the selling points you want them to hear in a manner that will resonate with them.  When we tell stories, the neural activity in the storyteller’s brain is mirrored by the neural activity in the listener’s brain resulting in engagement.  When we recite facts, there is no such neural coupling.

How to find your natural voice

Have We Forgotten How to Listen?
Scroll to top